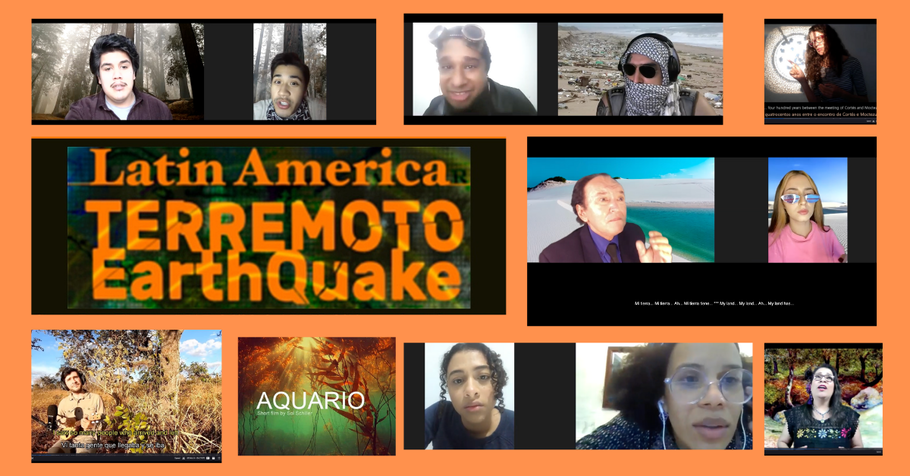 Everything is Shaking by Delbis Cardona
directed by Amytza Maskati
Venezuelan poet and actor performs his own poem.

O Sonho Africano/Incomparável/Particularidades do Meu Ser/
/ Africanizando
(The African Dream/Incomparable/Particularities of my Being / Africanizing)
by Morgado Mbalate
performed by Jamira Horácio Inguane
Mozambican poems from Brazil.
​
Aquario (Aquarius) by Sol Schiller
A multimedia piece exploring the pollution of the sea in Argentina.

Green Placenta written and performed by Iliana Munoz
directed by Gibran Valencia
A performer is invited to participate in an artistic intervention planting 20 trees in a sidewalk in Mexico City. It becomes a complete mess.

Your Body and My Body by Delbis Cardona
directed by Amytza Maskati
Venezuelan poet and actor performs his own poem.

**​TERREMOTO/EARTHQUAKE SHOW II
All pieces will be in Spanish, Portuguese or English with subtitles.

​¡Y se hizo la luz! (Let there be light!) Frida Tovar Velazquez
directed by Alejandra Anzorena
performed by Judith Inda* and Annya Katerina
Based on a Nahuatl ritual. If a flare falls in the middle of the forest
and there is no one to extinguish it, does the forest actually catch fire?

Se uma árvore pudesse falar? (If a tree could speak?) by Edgar Bueno
A song taped in the Brazilian “cerrado” (a kind of savannah)using instruments made of recycled materials.

The Biohazardous Waste Land by Aaron Higareda
directed by Melanie Queponds
​An adaptation of T.S. Elliot's The Waste Land from the perspective of
​a Chicano working in a Vernon, CA medical waste disposal facility.